Yosemite may well be the most jaw-dropping stop on our list.

Yosemite is a place that you’ve simply got to be there to fully appreciate it.

We’re sampling as much of America as we can in 29 days, so we packed as much Yosemite goodness as we could into a one full day.

Here were my favorites from our second visit to Yosemite:

You’ve probably seen tunnel view before as a background photo on your laptop: 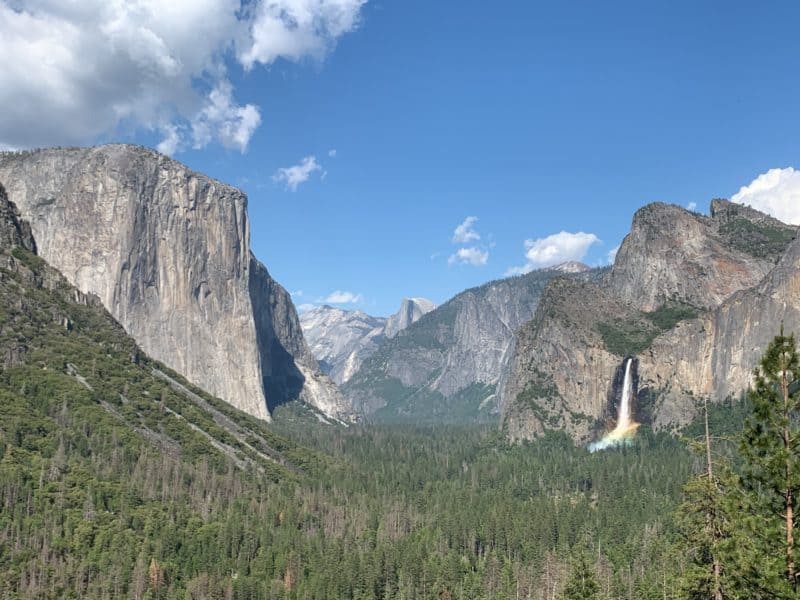 Yes, I took this picture with my iPhone XS mounted on an Osmo Mobile 2.

Tunnel View is so amazing that you’d have a hard time taking a bad picture. I even took a couple of videos to help give a little more perspective on what it looks like as you walk up, and then a little view as you scan the area horizontally.

It’s really one of those places that’s beyond words – you’ve just got to see it. 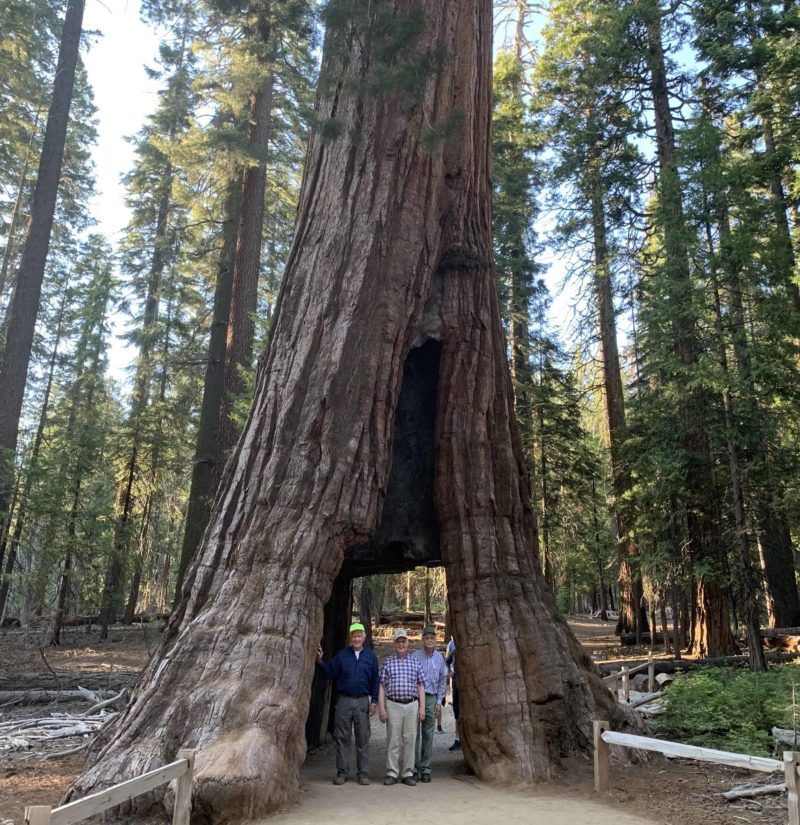 As we were visiting Mariposa Grove and checking out the sequoia trees, we bumped into these old timers who asked us to take a picture for them.

I noticed his smartphone was probably from 2007, so I took the liberty of taking a picture on my phone too.

I told the gentleman I’d text it to him, thinking it’d be nice for him to have a higher quality version if they wanted to get it printed.

He gave me his number and I texted the pictures over.

It’s been 2 weeks and I didn’t get a response that he received the photos. If he’s like most grandparents I know, I’ll get a response of “THX” on August 13th.

We chatted with them for a minute and discovered these guys are brothers – I believe they were 79, 81, and 82 years old.

They were lifelong Tennessee residents and had decided if they were going to hop in a car and see the places on their bucket list – they better get started.

They were just as sweet and kind as they look in the picture, and walked up and down the trail at a shockingly quick pace for their age.

Maybe their pace was bladder-related, but regardless of the reason – it was impressive watching how fast they marched along the trail.

At first I didn’t make this connection, but later Sarah pointed out that their age differences were exactly the same as our boys.

I really hope when my 3 sons are pushing 80 that they strap on their jetpacks and go tour the lunar surface together.

When we went to Yosemite the first time, Mariposa Grove was closed for refurbishment.

So we got our sequoia fix at Big Trees State Park (which didn’t disappoint).

This time around, I really wanted to checkout The Grizzly Giant – Yosemite’s biggest tree and one of the biggest in the world.

It was a pretty consistent uphill climb to get there, but when we arrived it was clear the Grizzly was the king of the forest out there. 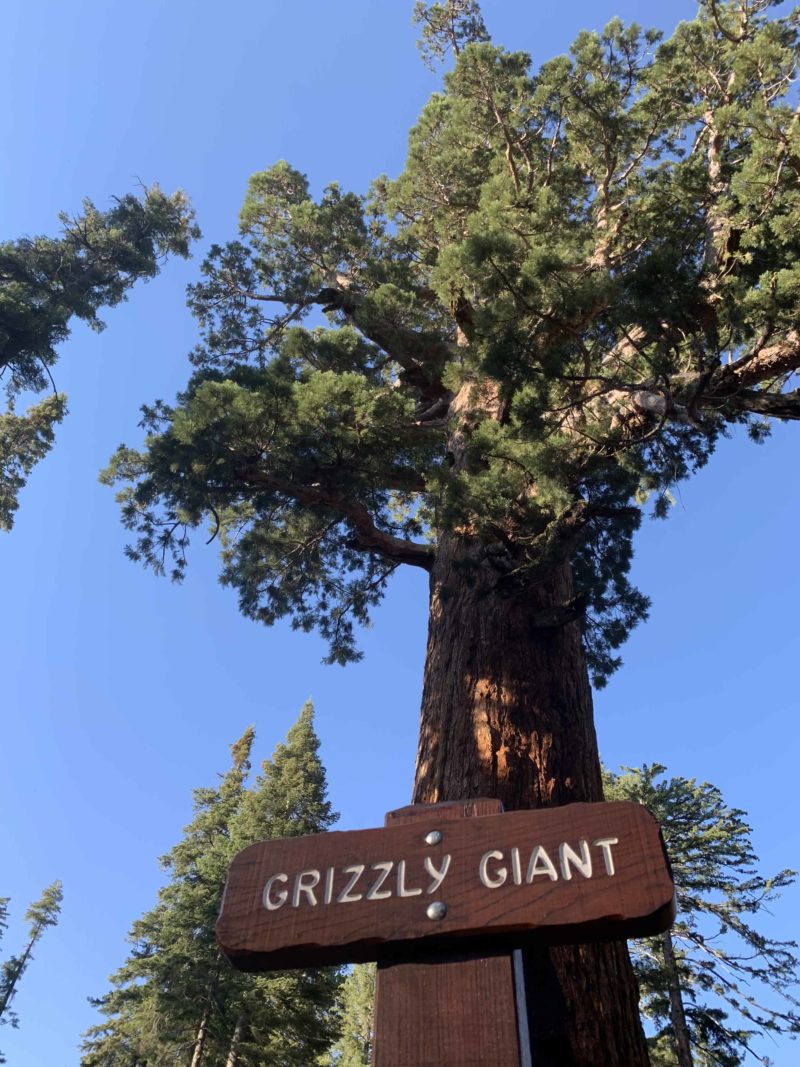 The limbs hanging off of the top of that tree are probably 150 feet above you, and bigger than any tree in your yard.

Right after the Grizzly Giant, we stopped by the tunnel tree that you can walk through (where we met the aforementioned old guys). 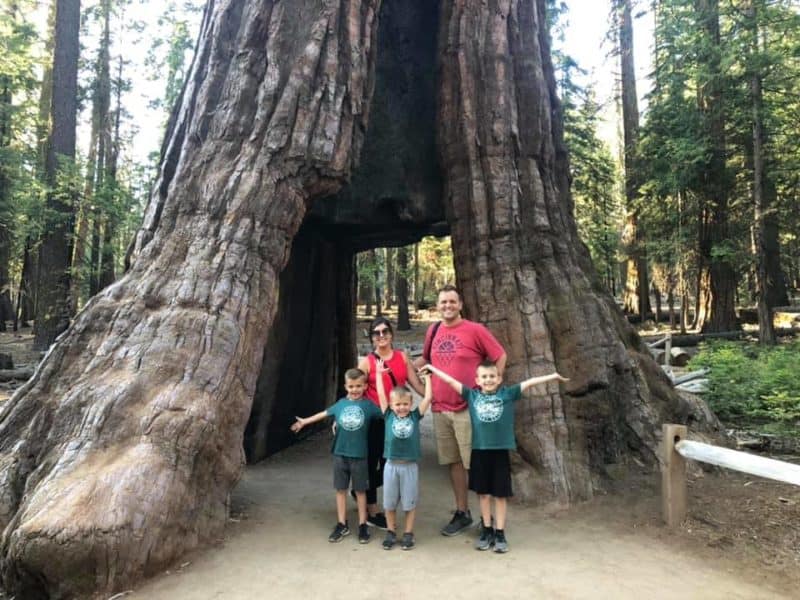 As a whole, we’re not a group that’s going to tackle any “strenuous” hikes.

In fact, on this trip I’ve learned that many “moderate” hikes are very likely to end up with my mom needing to be rescued by a helicopter, or with me punching a kid that won’t stop whining.

So we stick to the hikes that are rated “easy”, and that describes lower Yosemite falls.

On our way up, the boys were predictably “boiling” hot – so I took them for a dip in the stream. 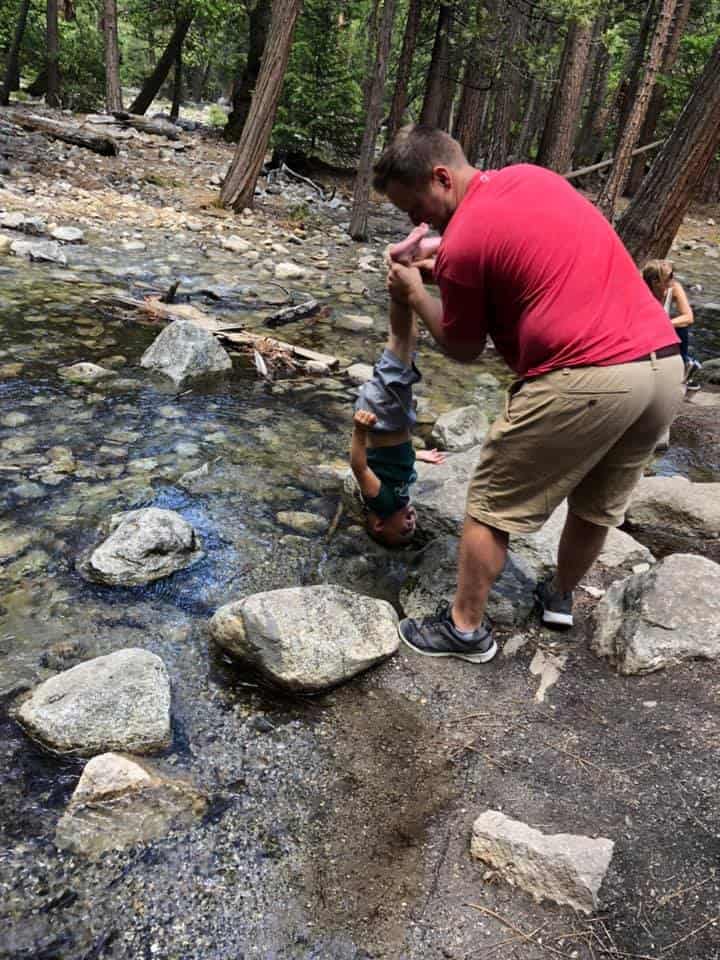 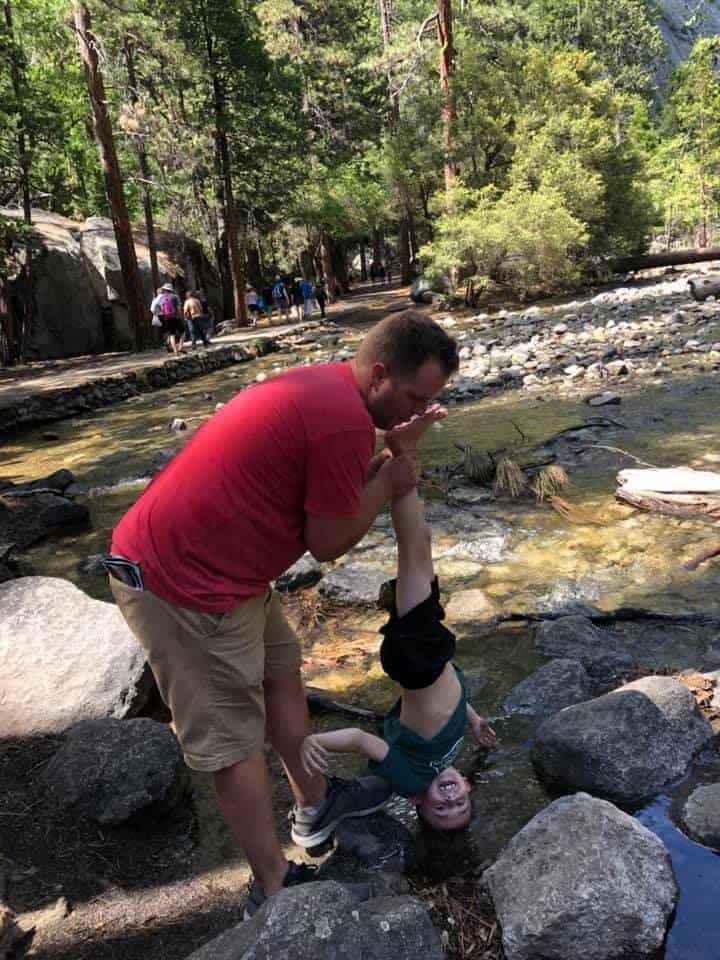 Then, we charged on and eventually made it to the falls.

In addition to the beauty, you’re getting blasted with mist from the falls while you stand there.

On a hot day, it’s super refreshing and a nice reward for sweating your way to the top. 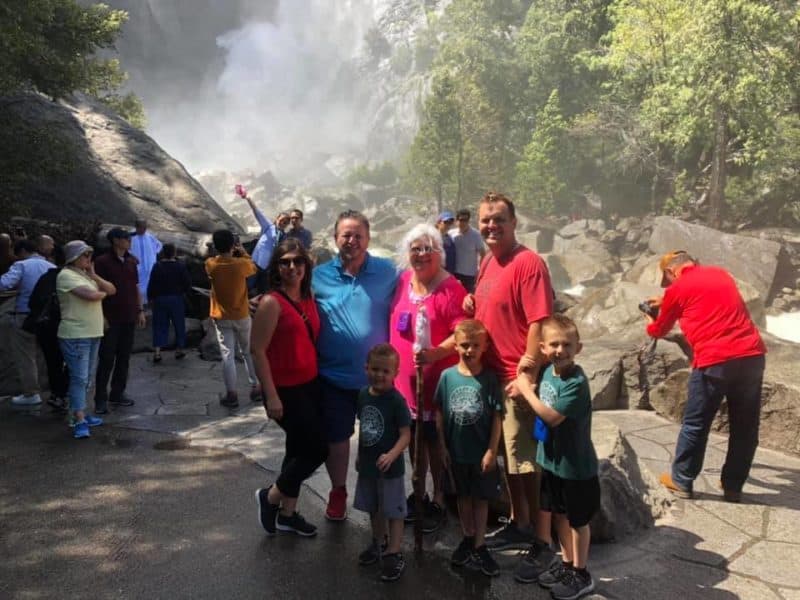 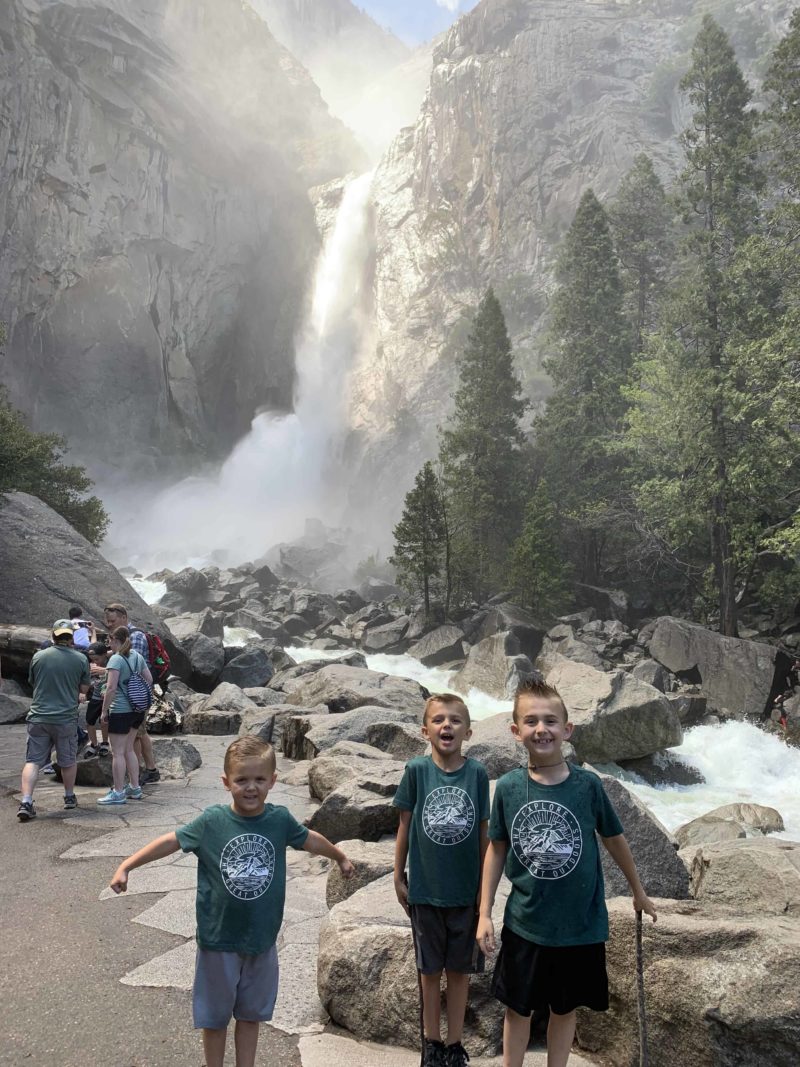 If you’re looking for bucket list suggestions, may I submit Yosemite National Park for your thoughtful consideration.

At first, every parking lot we turned into was so full of cars that I really thought…

“Should we just leave?”

But we stuck out the madhouse and eventually found a place to park and explore on foot.

At Yosemite there’s something for every interest – and such variety of things to see and do, including views and overlooks that have to be seen to be believed.

4 thoughts on “5 Highlights From Our Day In Yosemite”