If you’re a resident of Las Vegas, you know how many different activities there are to enjoy in the city. However, if you’re tired of wandering around your favorite spots in town, you might want to know about potential day trips from Las Vegas to spice things up.

In this article, we’ll walk you through ten different day trips from Las Vegas so that you’ll know where you can go to have some fun and come back on the same day. By the time you’re done reading, you’ll be an expert on the entertainment destinations outside of the city. 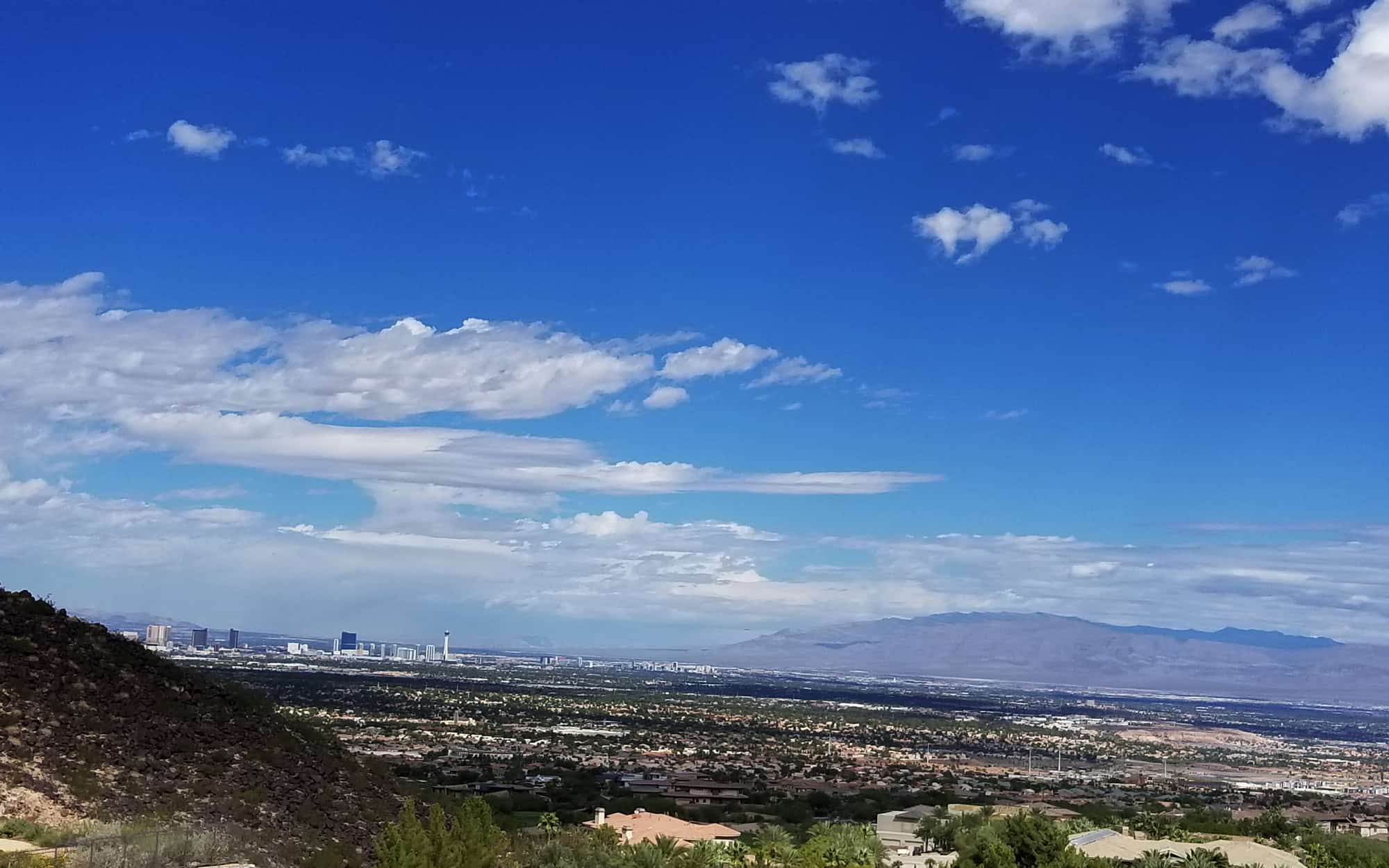 Henderson is a mere 30 minutes away from downtown Las Vegas, meaning that it’s the closest option for a day trip. As Nevada’s second-largest city behind Las Vegas, Henderson has a lot to offer despite being so nearby.

Henderson is more friendly-family than Las Vegas, meaning that you’ll find a larger selection of child-friendly restaurants and activities. If you’re interested in strolling around green spaces, Henderson has a bevy of walking and hiking trails embedded in the city.

If you’re into cars, you probably already know that the dealerships on Auto Show Drive will be up your alley. The Lamborghini dealership is especially fun, as they regularly rotate the vehicles on display.

Henderson tends to be a bit more expensive than Las Vegas on account of its wealthy residents, so plan accordingly.

Since its construction in the 1930s, the Hoover Dam has captured the public’s imagination. Located an hour from Las Vegas, taking a day trip to the Hoover Dam is a great choice for people who like to learn about history while taking in some impressive views.

The history of the Hoover Dam brings tourists from all over the world. When you tour the dam, you’ll learn about the labor movement, the political situation of the Great Depression, and the engineering feats that were required to build it.

Parking near the dam is plentiful despite the large volume of car traffic nearby. Remember to take pictures from the Pat Tillman Memorial bridge opposite the dam.

After walking around the dam, you can check out the nearby Boulder City, where you’ll find a few lunch places. 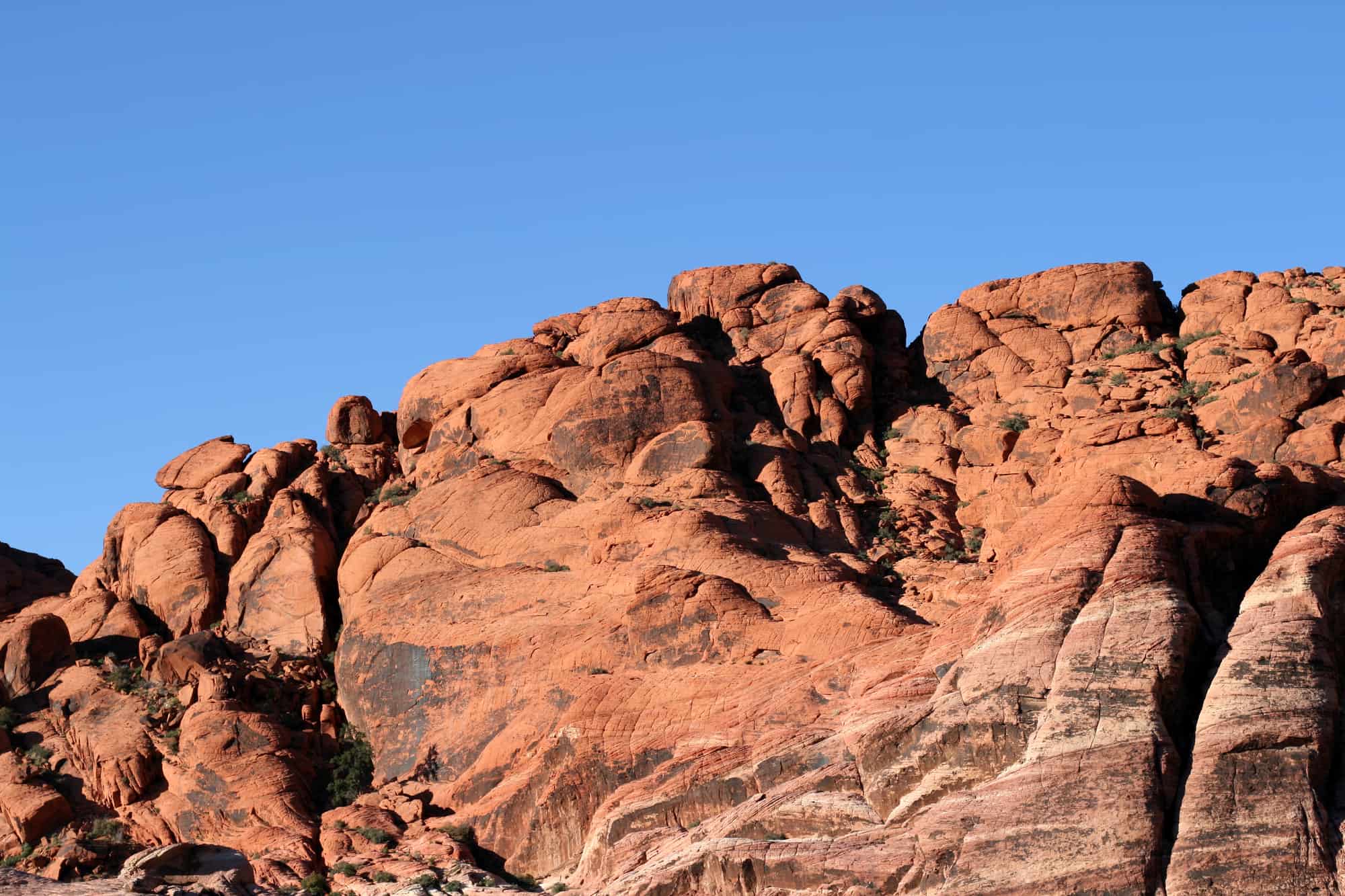 Likewise, you’ll never need to worry about finding parking while you’re in Boulder City, and it’s seldom the case that you’ll need to wait before being served at a restaurant.

In Boulder City’s downtown area, there are plenty of small boutique shops. However, you should make sure to visit early in the day, as most of the shops in the downtown area close before 5 PM.

The diners and coffee shops of Boulder City are where the local cuisine shines. BBQ is also one of the area’s staple foods. 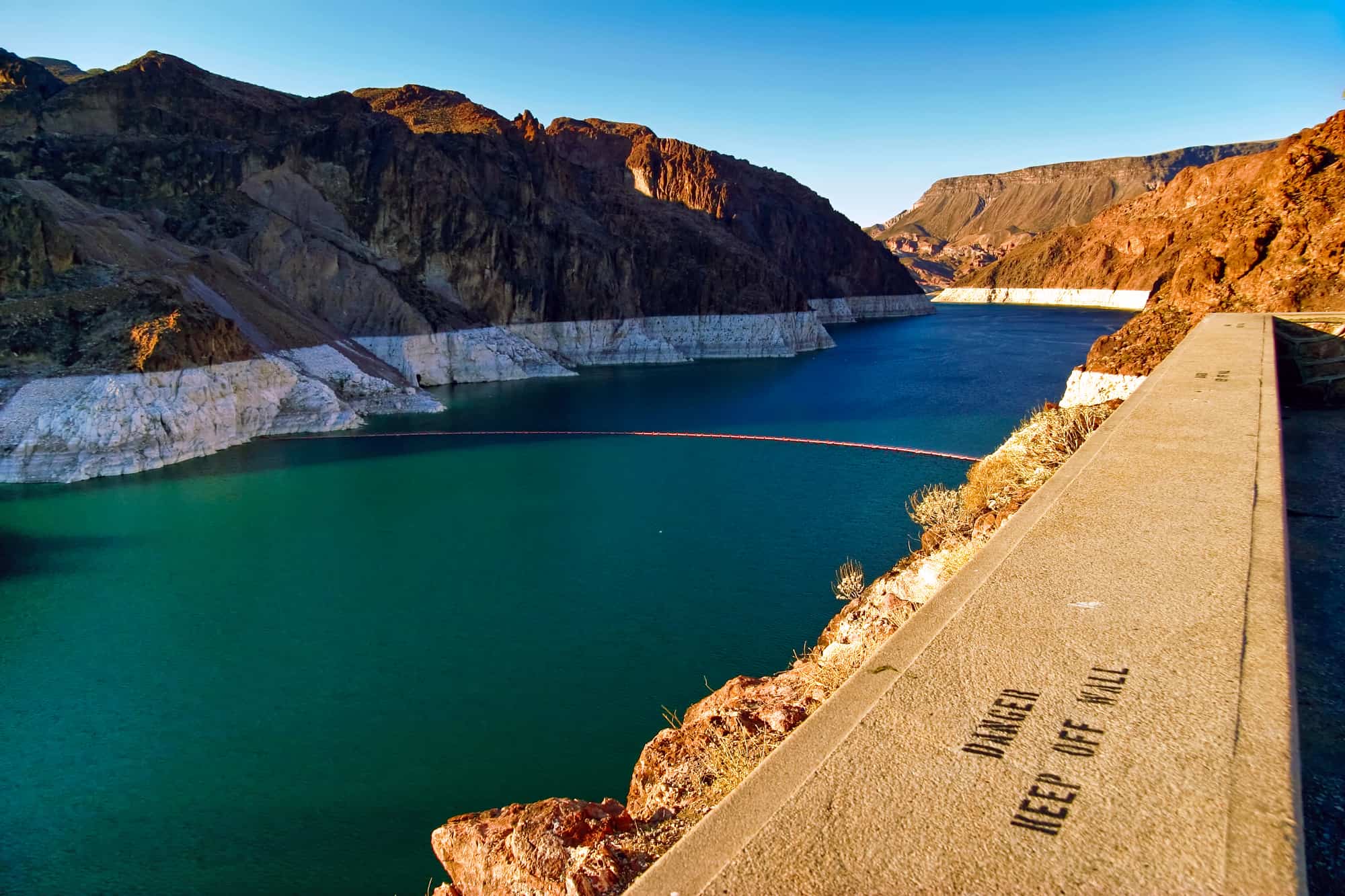 Lake Mead is a manmade lake located an hour from Las Vegas, and it’s the perfect option for a day trip if you enjoy boating, fishing, swimming, water skiing, and other still water watersports.

If you’re interested in sunbathing, the Lake Mead experience isn’t quite like being at the beach, but you may find it refreshing to recline by the waterside nonetheless.

You can also learn more about the lake’s history and its relationship with the Hoover Dam if you go to the visitor’s center. 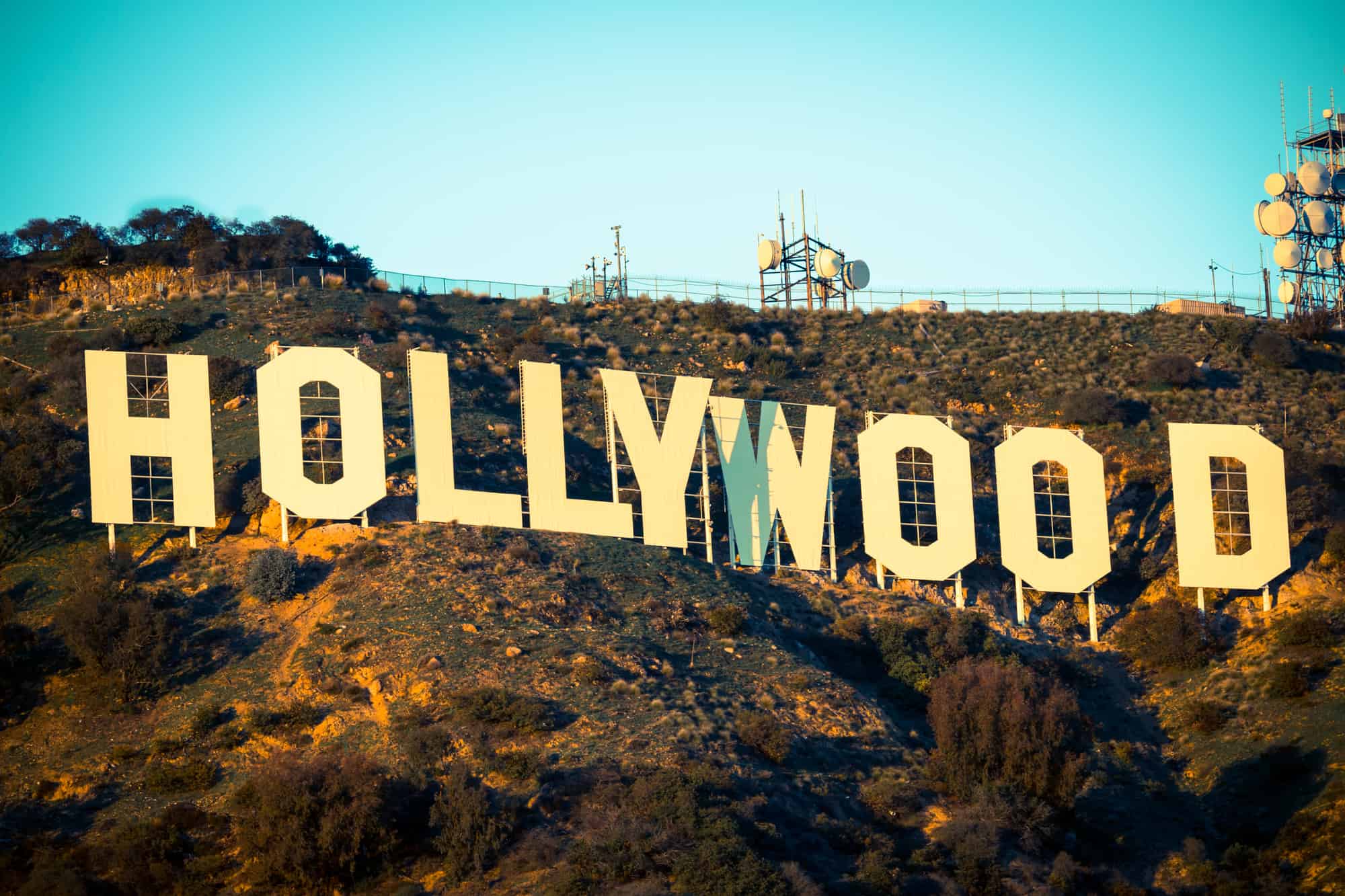 Hollywood is known around the world as the center of American moviemaking culture, and at a four-hour drive from Las Vegas, it’s technically within the range of a long day trip. You won’t have any problem finding parking when you’re in Hollywood.

Don’t miss the Walk of Stars, where you’ll find endless sidewalk tiles commemorating famous actors from years past. You should also head to the massive Hollywood sign to take a picture as a memento.

Hollywood isn’t the best place for families, but there are many opportunities to explore film history while you’re there. The Dolby Theater regularly has showings of films and sound experiences that are sometimes free to the public, so be sure to check it out.

There’s no shortage of restaurants to eat at in Hollywood and elsewhere in LA. Some of Hollywood’s best restaurants are Mexican, so be sure to grab a taco or a burrito.

If you’re looking for themed entertainment, there are also a handful of movie-themed restaurants in the area. Be aware that local eateries are typically better for your wallet.

While it’s possible to walk around certain areas of Hollywood, for the most part, it’s a community that you’ll need to drive around. 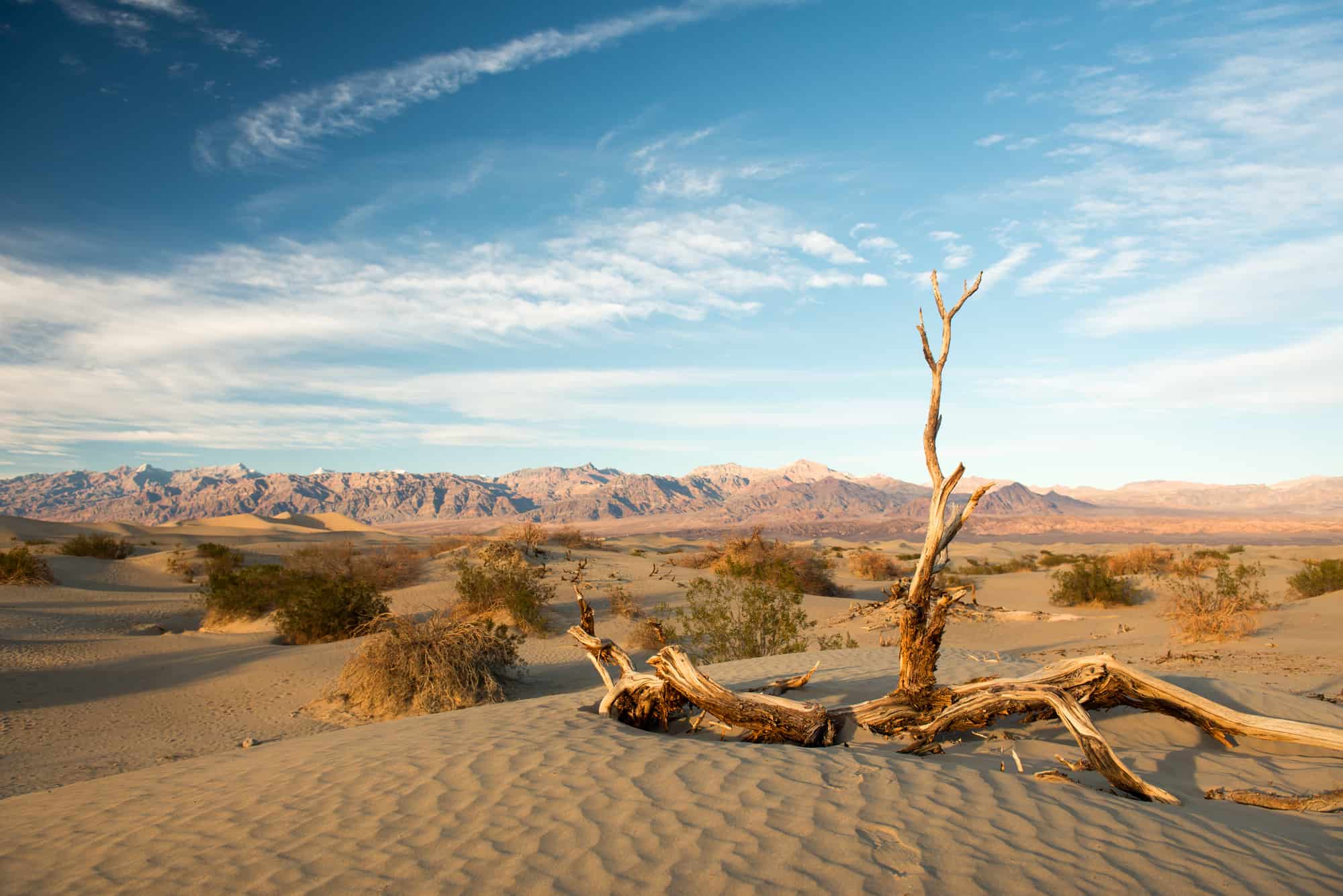 As one of the hottest places on earth, Death Valley is an interesting tourist attraction that’s only a few hours from Las Vegas. In Death Valley, you’ll find an extensive array of desert flora and fauna, beautiful deserts, and scorching hot temperatures year-round.

While there aren’t any restaurants or trails around Death Valley, you can spend plenty of time touring the landscape and observing the sand dunes and other natural features.

You should try not to visit Death Valley in the summer, but keep in mind that it’s not significantly cooler in the winter. Likewise, you should take care to avoid visiting Death Valley at noon, when the sun is the hottest.

If you do visit Death Valley, be sure to bring extra gas for your vehicle, reliable communications, a hat, and plenty of water. There aren’t many opportunities to resupply in the area surrounding the valley. 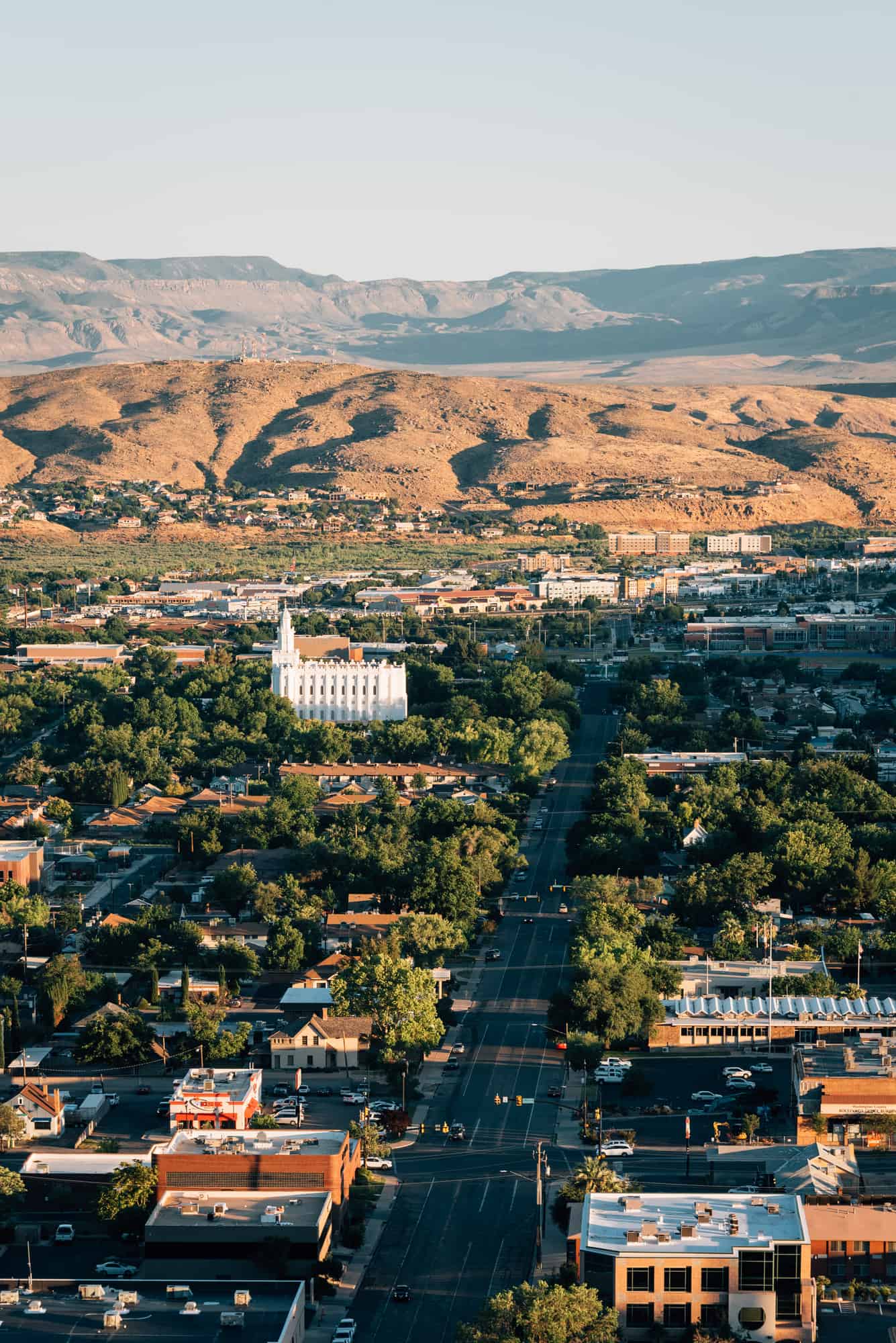 Located three hours from Las Vegas, St George is a small and pleasant city in Utah. In St George, you’ll find a lot of family-friendly activities such as a children’s museum, archaeological dig sites, and a motocross park.

If you’re looking to spend a day in St George, you’ll have the most fun if you watch a show at the amphitheater or the motocross park. Afterward, head down to the Dixie State University area to enjoy local restaurants and boutique shops.

St George may not be the most entertaining place for adults, however. If you’re not interested in the region’s archaeological history or taking your children somewhere enjoyable, the only activities for you will be centered around the university’s cultural life. 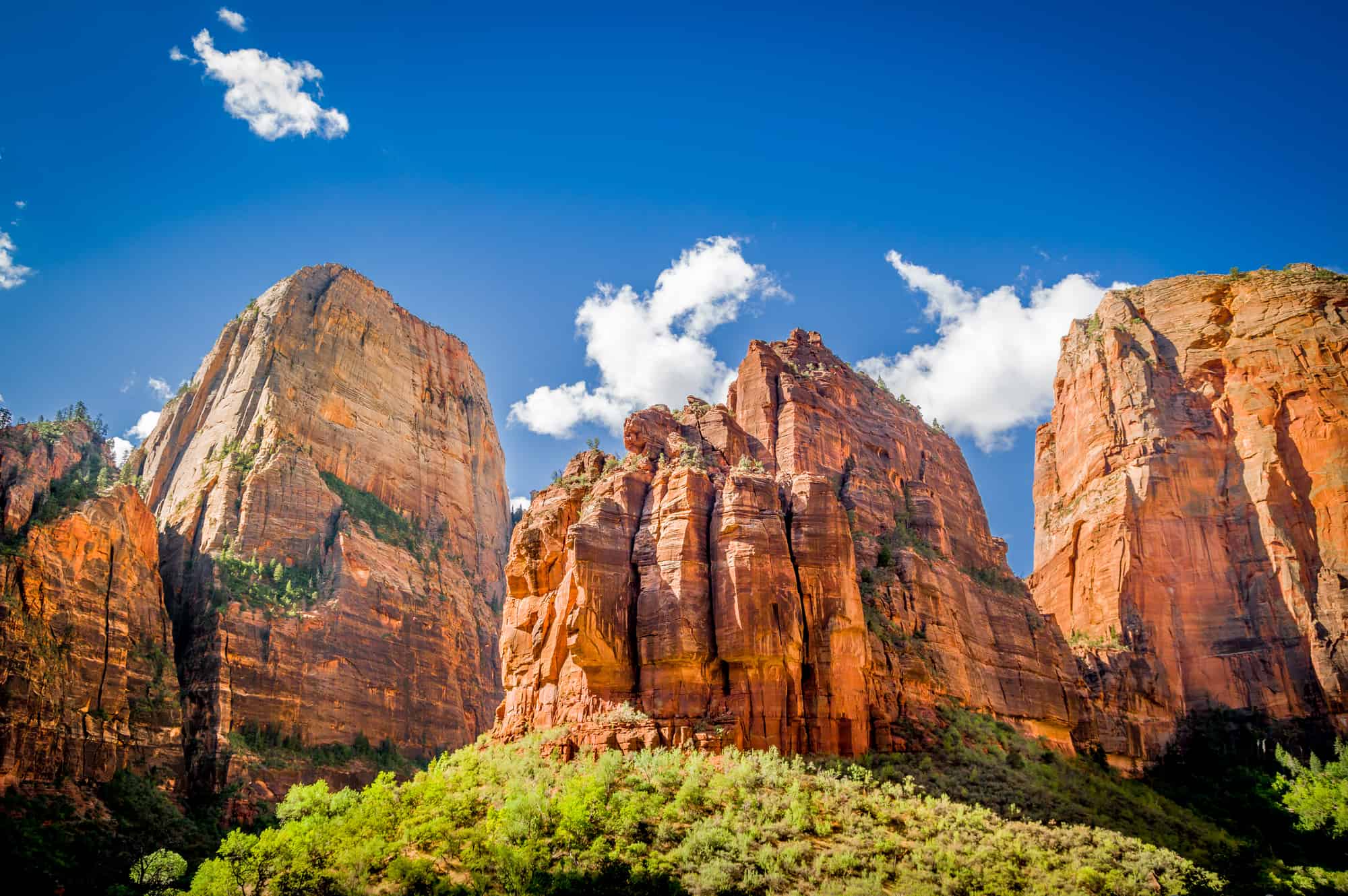 Zion National Park is three hours from Las Vegas, and it’s the perfect day trip for people who love to hike, walk through nature, and observe wildlife.

The centerpiece of Zion National Park is Zion Canyon, which is gorgeous to observe from an overlook or to hike through in the basin. Most of the scenic hiking trails in Zion National Park are of low difficulty, so you don’t need to worry about challenging strolls.

If you enjoy learning about geological formations and geographical features of parks, Zion National Park has a lot to offer. Be sure to check out rock formations like the Towers of the Virgin and the Court of the Patriarchs.

For wildlife lovers, Zion National Park also has a lot to offer. Specifically, you will see many birds of prey flying around the higher peaks of the park. Likewise, many people see bighorn sheep and deer wandering around the foothills near the largest of the park’s buttes.

Zion National Park is the most enjoyable to visit in the fall and the winter, though it can be pleasant in the spring when it isn’t raining. If you decide to visit the park in the summer, be ready for high temperatures and a very dry climate.

The historic Route 66 is an all-American landmark highway that’s accessible a mere three hours from Las Vegas. While Route 66 is no longer in active use, it’s a great showcase of abandoned structures.

When you visit Route 66, you can take a look at what America was like in the 1960s, during its heyday. Adjacent to Route 66, you’ll find many diner-style restaurants, museums, and restorations of old structures that remain true to their prior life.

There aren’t any places to walk around on Route 66, however. Likewise, there are no particularly notable landmarks, nor are there any shows to see or specific sites to visit. Instead, think of Route 66 as a tour through a forgotten section of America.

If you enjoy looking at abandoned landscapes, Route 66 is hard to beat. 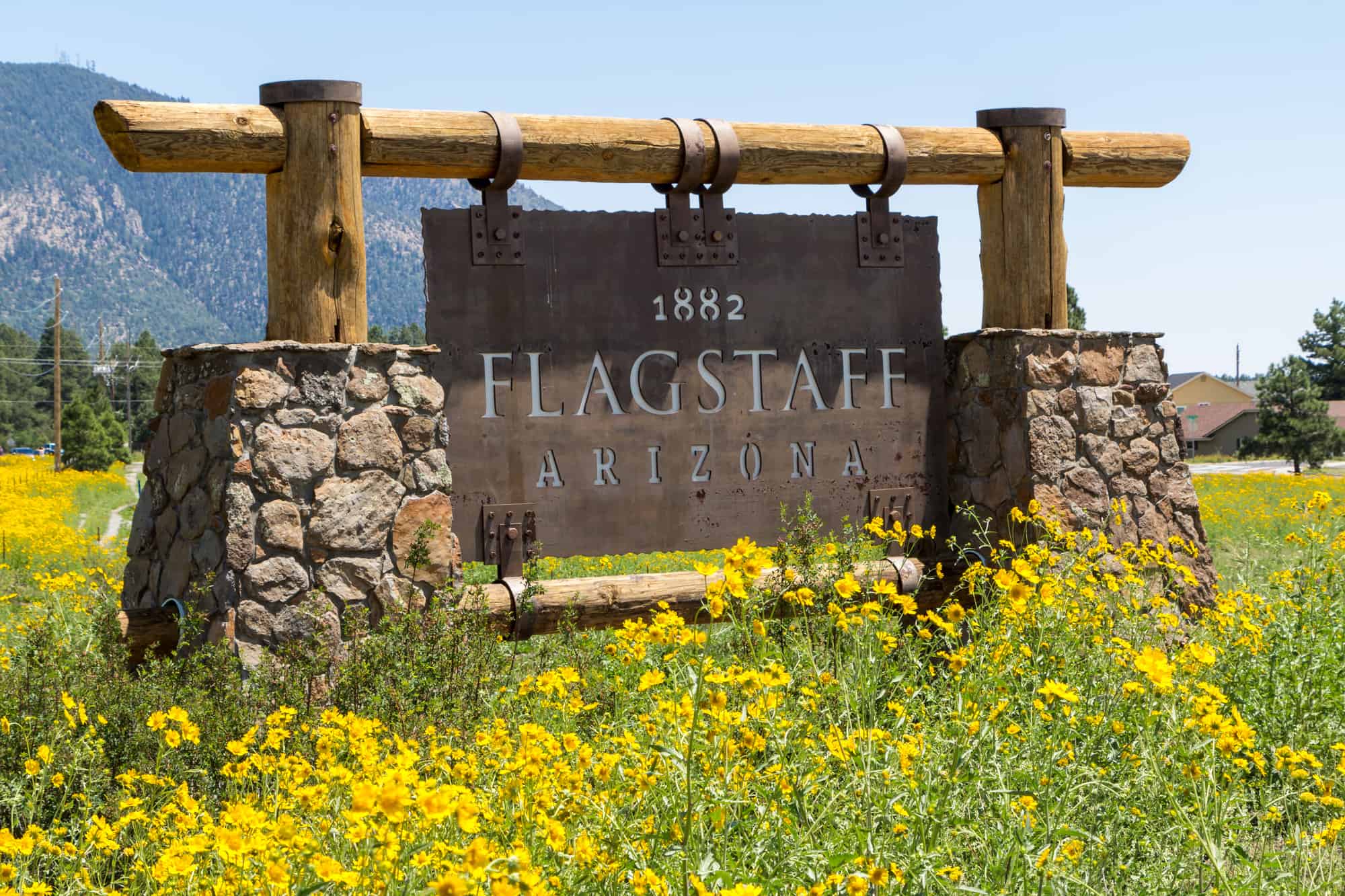 Notable sights include the antique Amtrak station and various historical installations commemorating the city’s history as a Wild West settlement along the path from the East coast to Oregon.

If you’re interested in gazing at the stars, a midnight trip from Las Vegas to Flagstaff is a great option. Because Flagstaff has light pollution ordinances, you can see more of the evening sky there than in most other urban areas.

You’ll need about three hours to drive from Las Vegas to Flagstaff. Most of the drive is through the desolate territory, so be sure to stock up on gas and water beforehand in case your vehicle breaks down. 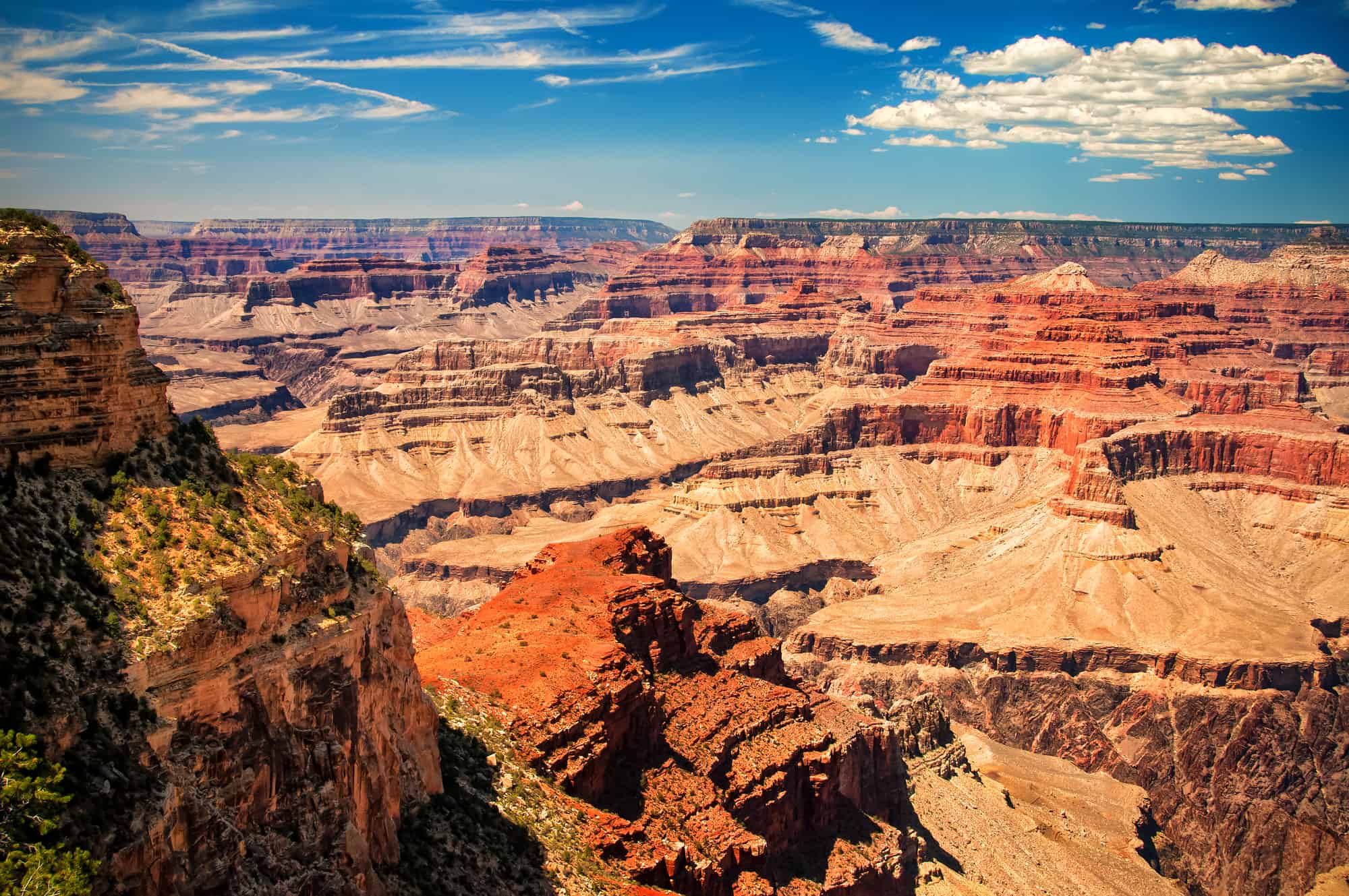 The Grand Canyon is one of America’s most notable places of great natural beauty. If you enjoy craggy rock outcroppings and impressive vistas, it’s hard to beat the sights of the Grand Canyon.

For people who are interested in learning a bit about geology, the Grand Canyon is very entertaining as a result of its exposed rock horizons leftover from millennia past.

You may also enjoy visiting the Desert View Watchtower at the top of the canyon. For a view that takes some hiking to get to, head down to Guano Point. Remember, Guano Point is named as such for a reason, and many local birds enjoy circling above the rocks there.

If you or your family enjoys animals, you’ll appreciate the donkey rides from the top of the canyon to the river at the bottom. The ride will take most of the afternoon, so be prepared for a lengthy trot down the cliffside.

Train lovers will be pleased by the canyon’s railway depot, which has been preserved such that it is similar to its state in the early 1900s.

The Grand Canyon is located about three hours from Las Vegas. There’s plenty of parking at the top of the canyon, though you may find that there aren’t very many places to dine. You won’t have any trouble finding a place to buy souvenirs, however.

Now that you have a handful of different day trips from Las Vegas to choose from, it’s time to think about what you would like to do and which of the day trips would fit your needs the most effective.

You’ll need to have a reliable vehicle no matter which day trip you choose. Likewise, as most of the day trips from Las Vegas require driving through the desert, you should make sure that your vehicle is in good working order and has plenty of gas before you head out.

Scroll back to top