The signs for Wall Drug seemed to start showing up once we passed Indianapolis on our way to South Dakota.

I’m not a coffee snob, but I have started taking my coffee a little more seriously over the last year or two. So my expectations were low, but there’s no way I was missing out on a 5 cent coffee.

Here’s me filling a mug full of skepticism at Wall Drug: 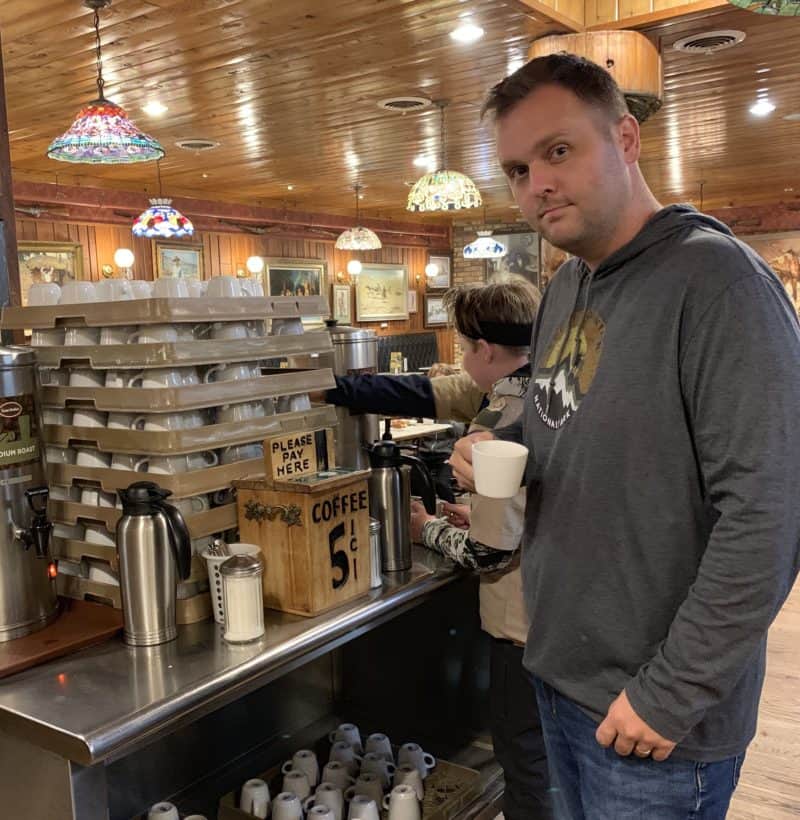 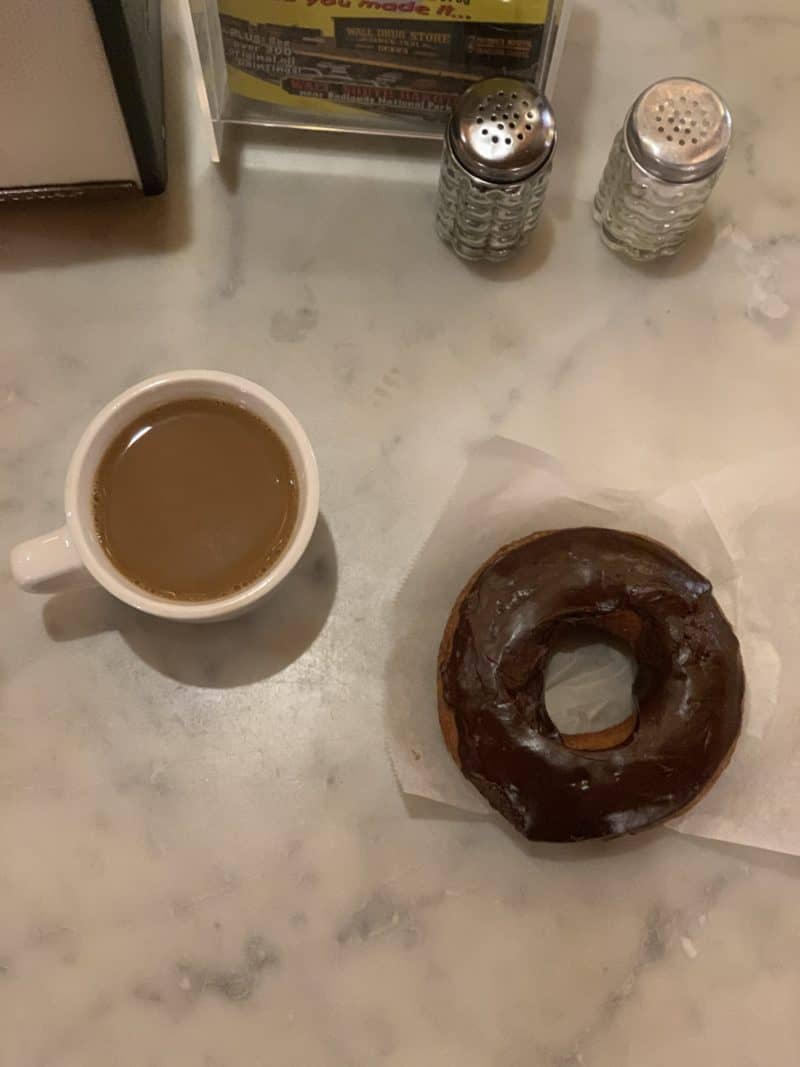 Before I tried the coffee, my mom took a drink and  said “the coffee’s pretty good!”

To give you some context on that statement…

Asking my mom where to go get an amazing cup of coffee would be like asking Michael Scott where to get a great pizza on your trip to New York.

Her home coffee maker cost $19.99 back in 1996, and Maxwell House is her favorite artisan coffee roaster.

The coffee wasn’t horrible – but it wouldn’t be considered good either. I think it was worth about 50 cents. The donut however, was the real star of the Wall Drug show. They make them fresh, so they’re a little warm and crispy.

Not Duck Donuts good by any means – but still a solid donut.

If you’re in the Wall, SD area – you might as well stop and shop around and check out the over-the-top decor. They even give away free bumper stickers – which started our collection for the Monster Van: 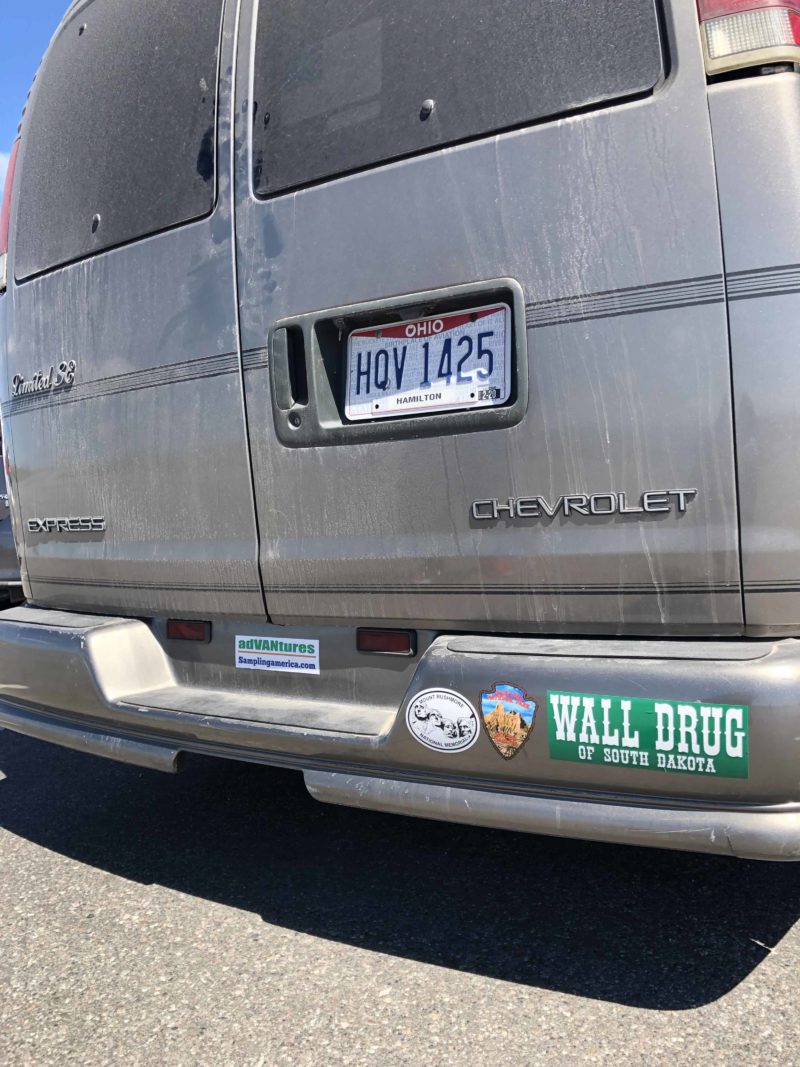 After our morning stop at Wall Drug, we drove about an hour to Mt. Rushmore.

I’ll be honest that Mt. Rushmore wasn’t high on any of my lists of places I’d like to see. I didn’t have anything against it – it just seemed to be so far out there for what would probably be a quick stop.

I’m happy to report it was much better than I expected.

We were weaving up a rather steep, mountainous road for what seemed like forever when suddenly we turned a corner and my buddies George and Abe appeared.

It would have been a cool moment to video, but none of us knew it was coming. There were plenty of “oohs and ahhs” in the van.

It was a really grand spectacle to take in. Like many things, pictures really don’t do it justice, but I’ll try anyway. 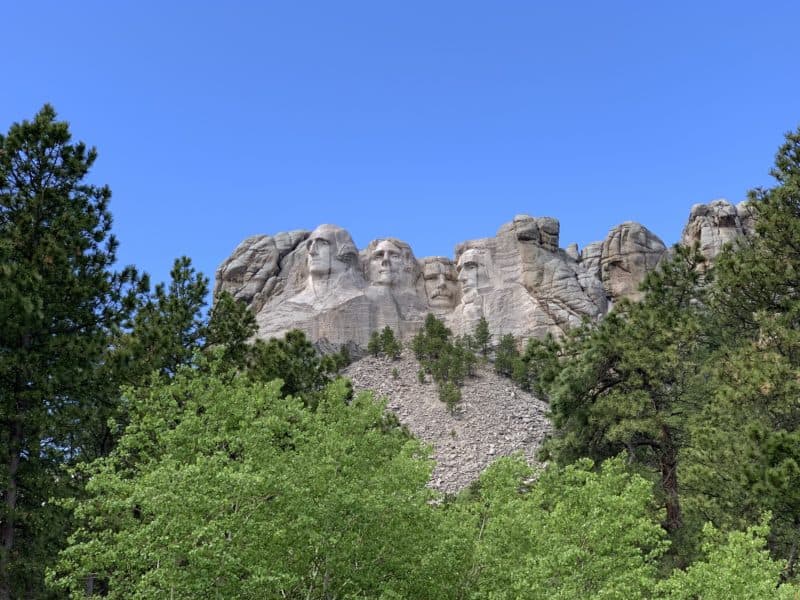 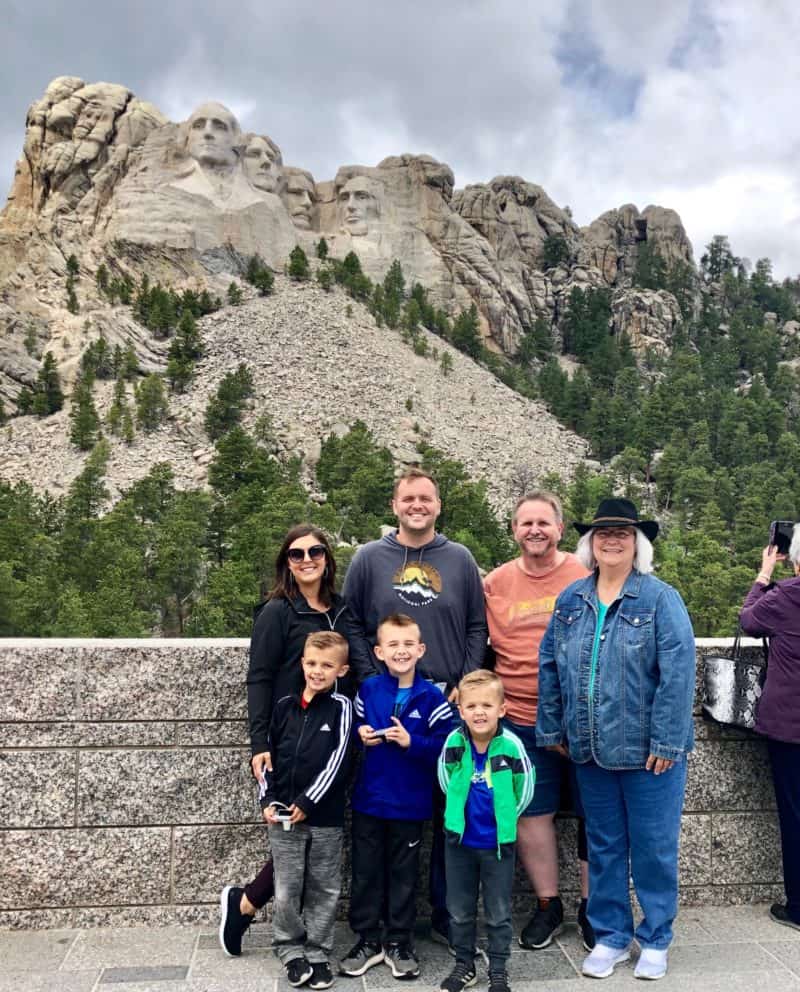 They even had the Monopoly man there taking pictures with kids, which was a nice touch. 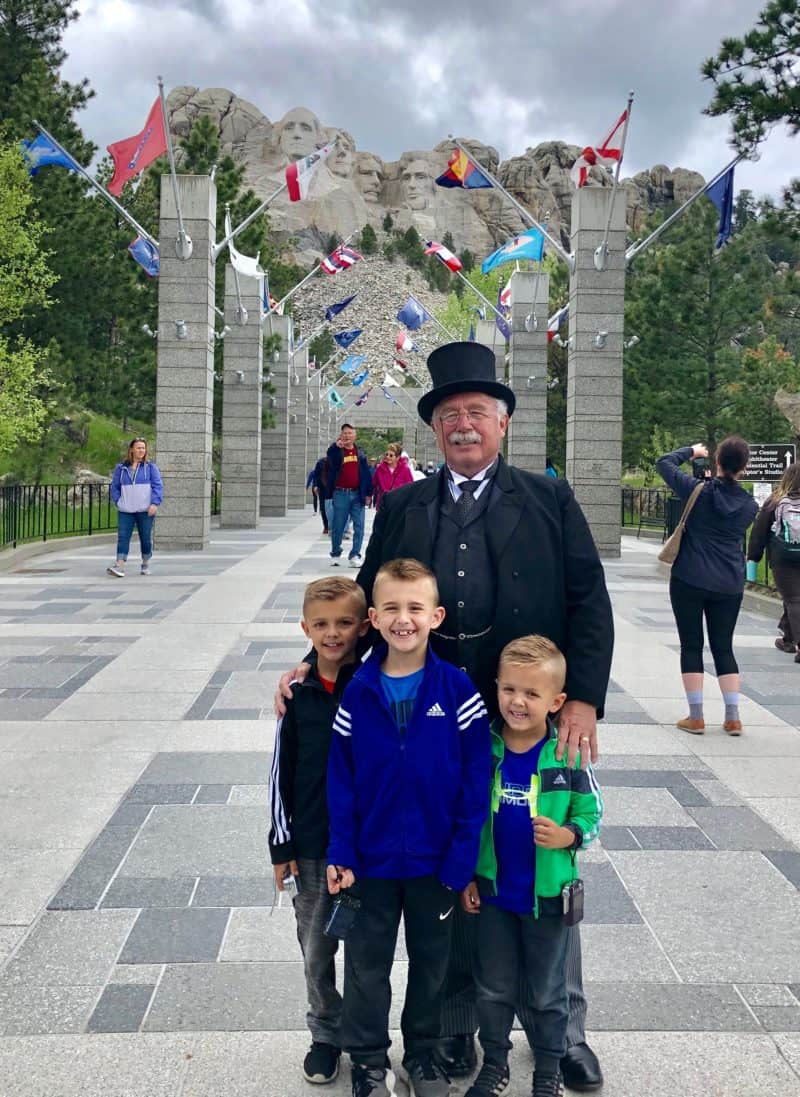 We spent a few hours at Mt. Rushmore, which felt like enough. We took the Presidential Trail to get up closer to the mountain, and if you don’t like steps (who does?) I’d recommend going to the left and coming back the same way you came.

My understanding is that if you go to the right, you’ll be battling some 400+ steps on your journey to get underneath George Washington’s nose.

In fact, later on I took Jackson over to the Sculptor’s Studio which kept winding down new flights of stone steps – about 120 in all.

At the beginning of our walk I was thinking “Oh, this might be cool!”

After I’d descended about 80 steps that changed to “Ok, this better be cool.”

It was pretty cool to see, but the ol’ thighs and hammys were feeling it after I chased an 8 year old back up those 120 steps.

Overall, I’m definitely glad I saw Mt. Rushmore in person. A half day trip is fine for most people, unless you like to read every word on every sign in the park.

If that’s you, please don’t invite me to join you on that trip.

Don’t plan a vacation around it, but if you’re within a few hours drive – go for it.

When you research a trip to Rushmore, you’ll undoubtedly hear about the Crazy Horse Memorial that’s only about 10 miles away.

The line of logic goes “You’re already in South Dakota, you might as well go see Crazy Horse.”

Perhaps we made a mistake of going to Mt. Rushmore first – because we were all super impressed with it.

Then, we pulled into the Crazy Horse Memorial and were greeted with a $30 fee to enter. That’s not a big deal – but again, we were comparing that to seeing Rushmore for free + $5 to park.

I won’t bore you with all the details, but what I quickly learned is that you can’t get nearly as close to the Crazy Horse monument as you do Mt. Rushmore.

We also sat in on a video that was interesting to learn about the history of the monument, but it was also awkwardly long with some really boring parts.

The net result was that we entered the theater with 3 excited kids, and finished the movie with 2 of them draped over seats snoring.

Admittedly, I didn’t know much about Crazy Horse or what this memorial was all about when we went.

I knew it was a native American face carved into the mountain, but I didn’t realize that it’s a work in progress. The long term plan is to have the mountain looking like this statue: 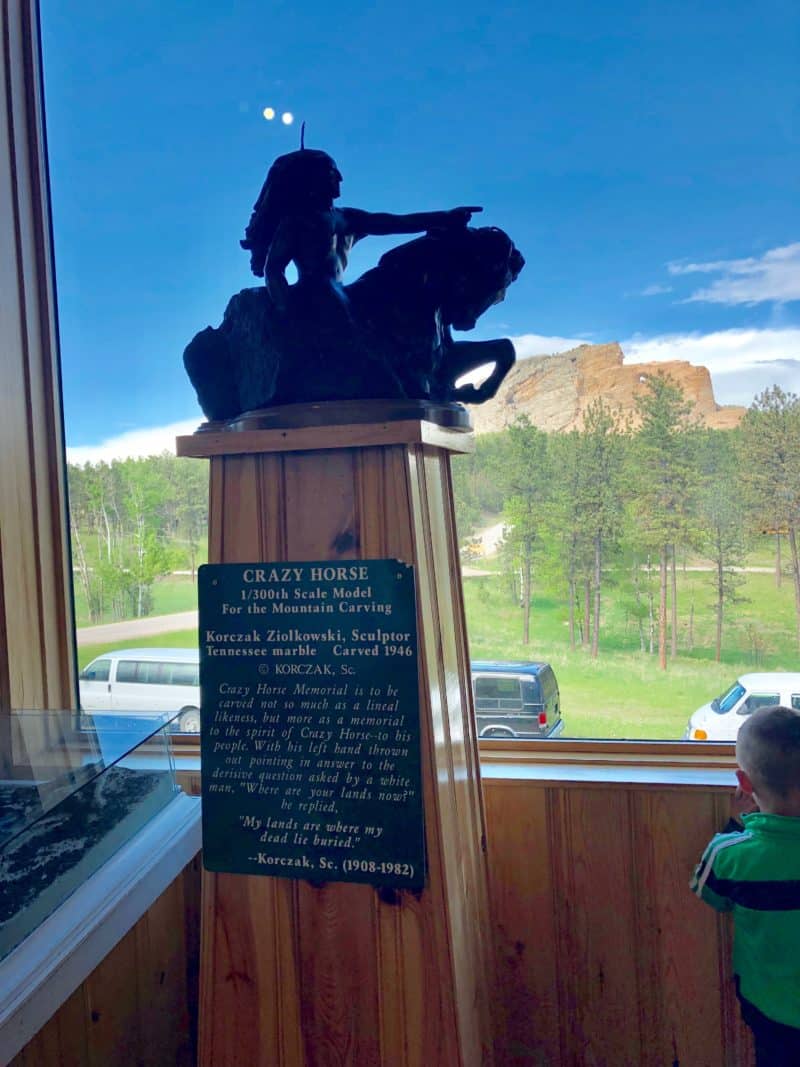 In the background, you can see what they’ve got so far…

Basically, a profile of the guy’s face.

They started working on that in 1948.

I pulled up the calculator on my phone, and I’m now estimating that the full Crazy Horse Memorial will be ready in the year 2187.

If I were doing it again, I’d have stayed at Wall Drug for a second cup of coffee and read a few more signs at Mt. Rushmore and skipped Crazy Horse.